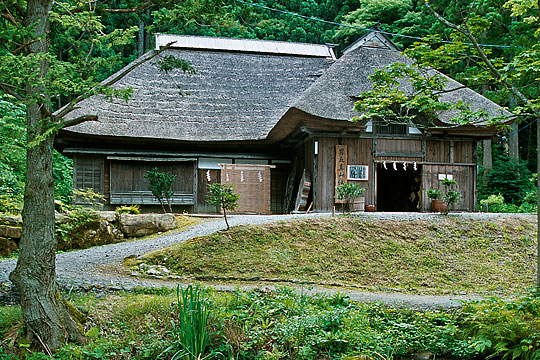 A Summary of the Oga Shinzan Folklore Museum's Namahage Performance

The show is captivating, the banter between the Namahage and the household head is humorous, and they are both accentuated by the atmosphere of this converted traditional home.

For more information about fees, times, etc., click here.
* You can also use the combination ticket with Namahage Museum. 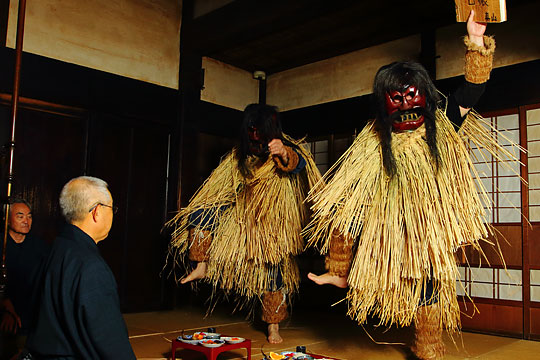 On New Year's Eve, Sakidachi (a man who helps the Namahage as they visit villager's homes) calls on each house to make sure that the family isn't mourning the passing of a relative or coping with a serious illness of a family member. He also asks if the family has experienced the birth of a child in the passing year.

If any of the above things have happened in the past year, the sakidachi and the Namahage move on to another house. If nothing has occurred to prevent the visit, he asks if the Namahage may enter. With the permission of the head of the household, several Namahage enter the house.

The Namahage stomp around the house and eventually settle down near the fireplace, where they are served meals and sake (rice wine). The Namahage begin to talk with the head of the household and ask about the harvest and the health of the older members of the family. The Namahage then inquire about whether or not the older members are being adequately cared for by the younger members, and ask if everyone in the family worked hard (or studied hard) in the passing year. The Namahage warn the head of the household that they would be angry if someone in this family was lazy, disobedient, or not working hard.

Then, one of the Namahage points out that in fact some members of the family are indeed lazy because they did not even make the effort to come to the living room to greet their Namahage guests. The head of the household tries to convince the Namahage that none of his family members are lazy. To confirm this, one of the Namahage takes a book out of his pocket and begins to examine it. Since the Namahage see all that happens in the village from the top of the mountain and because they record all of this information in their secret book, Namahage you see, know everything about the villagers. 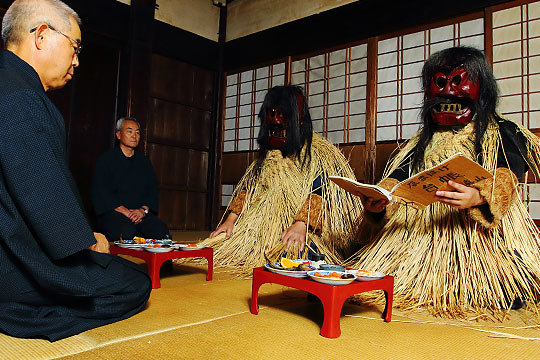 The head of the household increases their efforts to pacify the Namahage. He gives mochi rice cakes to them, and promises to do his utmost to improve the attitudes of both his children and their mother. He begs the Namahage not to take his wife and children to the mountain this year.

Finally, the Namahage tell the head of the household that they believe he is sincere about working to improve the attitudes of his family. Then, they instruct him on how he can call the Namahage back at anytime (by clapping his hands three times while facing the mountain) just in case the children and his wife do not listen to him. The Namahage then leave the house, but warn that they will be back the following year.

In Oga, Namahage are believed to chase away bad luck and evil spirits with their loud voices and noisy actions. Their visits also cause the villagers to reflect on the passing year. As it always has been in Oga, after the Namahage have left, it is time to welcome the new year.